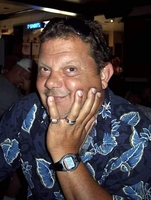 Robert Hayes, known to many as "Bob" and "Bobby", sadly and unexpectedly, passed away on July, 5th 2020 at the age of 64. Bob was born in Millville, NJ. He was a talented basketball player and participated in his school's basketball team. They went on to win many awards as well as a conference title which he was recognized for. He then went on to play for the Varsity basketball team for four years in High School. Robert loved to play pool and participated in many pool leagues and tournaments throughout NJ and PA. He was an expert in this area and would be victorious in many tournaments. He had several hundred trophies, ribbons and certificates to show for his talent. One talent was his trick shots which he would proudly show to others. Many called these the "Bobby shot". His favorite music artist was Elvis Presley. He also enjoyed the oldies and any type of country music. Bob could always be found wearing a Hawaiian shirt, with the first few buttons undone and his gold cross chain. Rob was a jokester; he always had a new joke to tell or an old favorite to make you laugh and smile. His SMILE and LAUGH are memorable. He enjoyed Camping, along with playing arcade games with his family. He would always try to win the largest stuffed animal he could just so he could witness his FAMILY smile. This was his greatest treasure above all. Every Party, Birthday, Baptism, Communion or get together, he was front and center. Bob was truly a jack of all trades. He could fix anything and if he wasn't sure he would always find a way to make it work. Thank you Dad for being the Best for all of us girls, your grandchildren and siblings. We have so many cherished memories that will last a lifetime. Robert is survived by his four daughters, Dana Jones (Steven), Heather Vargas (Luis), Kaylynn Goswick (Nick) and Sabrina Hayes; Debbie Hayes mother to his girls; 12 grandchildren, DeAndre, Tara, Whitney, Shaun, Kenny, Luis, Casey, Jeremy, Brielle, Gianna, Nicholas and Bailey;1 great grandson, Kobe; 3 brothers, Russell (Kathy), Bruce (Toni) and Richard (Dee); 1 sister, Patty (Paul) and several nieces, nephews, cousins and aunts. He was preceded in death by his parents, Alfia and Rutherford B. Hayes and a brother, Father Gary Hayes. Funeral services and burial are private. Arrangements are by DeMarco-Luisi Funeral Home, 2755 S. Lincoln Ave., Vineland. Memories, thoughts and prayers may be extended to the family by visiting dlfuneral.com.