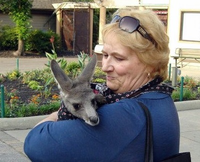 Catherine "Cathy" Mercogliana of Forest Grove and Vineland, NJ passed away on Monday, September 7, 2020 at the Millville Center, Millville. She passed away after undergoing grueling and extensive treatments for pancreatic cancer. Catherine was predeceased by her parents, John and Catherine "Kay" Mercogliana. She is survived by her two sisters, Mary Mercogliana of Forest Grove who was her primary caregiver as she underwent her cancer treatments and her supporting sister, Antoinette Mercogliana of Nevada. Catherine was born in Vineland but was raised in Forest Grove. Her heart always remained in Forest Grove on the small family farm where she grew up with many pets including two beloved ponies that brought her such great joy. Catherine was a lifelong learner, animal and nature lover and adventure traveler. Her academic career took off at Stockton State College in Pomona, NJ continued at St Joseph's University in Philadelphia, PA and culminated at the Center for Homeland Defense and Security at the Naval Postgraduate School in Monterey, CA. Her favorite trip and a place that held a special place in her heart was Antarctica. Having the opportunity to be close up and walk among the various penguin species was a thrill that she said could never be matched. Her trip was all the more exciting because she planned it so she could wake up in Antarctica on her birthday in 2019. Her interest in the polar regions took her to Svaldbard to see the polar bears, walruses and beluga whales. She also was enchanted with her visit to the Galapagos Islands and celebrated crossing the Equator with her new friends. In addition to her international nature travels she had visited Italy with her sister, Mary and had visited about half of the US National Parks as well as many state and local parks. She had been employed by and retired from the federal government after 23 years of service. Prior to that she had been employed by the State of NJ for 20 years including having worked for the New Jersey Department of Environmental Protection. In addition to her sisters, Catherine is survived by her aunts and uncles, Olympia Cauthen, Santino (Jerry) Folino, Jean Grimm, Martha Ingling, Vincent Mercogliana and Viola Pace and many cousins. She is survived by her exceeding generous and compassionate friends and neighbors Carlos and Evelyn Rolon. She is also survived by long term and more recent friends including her Forest Grove Bus Buddies and her travel inspiration and spirit booster out of Boston. Family and friends will be received on Friday, September 11, 2020 from 10am to 12pm, with funeral services to follow at 12pm at DeMarco-Luisi Funeral Home 2755 S. Lincoln Ave., Vineland. Burial will be private.