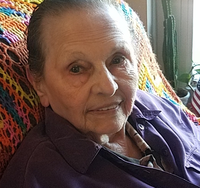 Ana Celia Vega passed away on Thursday, February 11th, 2021 in the early morning at the Veterans Memorial Home in Vineland at the age of 85. She was born to Salvador and Ana Emilian on June 2nd, 1935 in San Juan "La Perla" Puerto Rico. She moved to Manhattan, NY at the age of 17 leaving behind her preparations to enter the convent to become a nun. There she met her soon to be husband, the love of her life, Narciso Vega. They married when he returned from the Korean War and immediately started a family and moved to New Jersey. Ana Celia's life passion was her faith, family and helping the community. She was one of the founders of the Spanish Community Center in Landisville, and served on the Board of Directors until the mid 1980's, where she then became deeply involved in the Our Lady of Victories Catholic church. She joined the church choir, was a member of the Cursillo, El Sagrado Corazón, and served as a missionary visiting areas of poverty stricken countries, and was also a member of the Saint Francis of Assisi Order. She and her husband then moved to Puerto Rico in 1991 where she endured a long battle of breast cancer in 1998, choosing to move back to New Jersey in 2008, she also battled a very difficult bout with colon cancer. Ana Celia was a strong and resilient woman who put her faith in God and survived both cancers until He said it was her time to come home. Ana Celia is survived by her 3 children, Myra Castro (Jose), Wanda Valentino (Jose) and Nelson Vega (Maritza); her 16 grandchildren, 28 great grandchildren, and 2 great-great grandchildren who she loved dearly. She is preceded in death by her husband, Narciso Vega; her parents, Salvador and Ana Emilian; son, Patrick Vega; daughter, Mimi Arrigoni and grandson, Fabian Castro. She will be sadly missed by all her family that loved her, and a very special thank you to the Honor Circle Staff at the Veteran's Memorial Home. Family and friends will be received on Wednesday, February 17, 2021 from 6pm to 8pm at DeMarco-Luisi Funeral Home 2755 S. Lincoln Ave., Vineland and again on Thursday, February 18, 2021 at Divine Mercy Parish, 23 W Chestnut Ave, Vineland, from 9am to 9:45am followed by a funeral mass at 10am. Burial will follow in Our Lady of Victories Cemetery, Landisville.