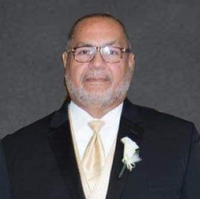 With a lot of love and heavy hearts, the children of Ruben Soto Jimenez, announce his passing after a brave battle with cancer and health complications. Ruben, 67, passed away May 31st, 2021. Born and raised in Isabela, Puerto Rico, he moved around a bit, and settled in Vineland, NJ, with first wife, Gloria to raise his family, watching his family grow to include many grandchildren. Working for the Trump Plaza Casino for 26 years before retiring for medical reasons, he filled his free time with family and working on cars, fixing them, and passing on that interest and passion to his son and a couple of his grandchildren. In his retirement, he was sure to enjoy it with lots of travel and fun, never to turn down having a good time with music and dance, the louder the better, to the amusement of his family. Ruben is survived by his children, Gloria Ann Medina (Rafael), Lillian Simpkins (Michael), and Ruben Soto (Raquel); twelve grandchildren, Rafael, Joseph, Joshua, David, Darrin, Trevor, Elena, Elise, Aiden, Jaslene, Isaiah, and Leilani, as well as, his sister, Carmen Acevedo, and brother, Juan Soto, and many nieces, nephews, cousins, and friends. He is preceded by his parents, Juan and Ana Soto; sister, Carmen Soto, and several nephews. Family and friends will be received on Friday, June 4th, 2021, from10am to 11am with a short funeral service at 11am at DeMarco-Luisi Funeral Home, 2755 S. Lincoln Ave in Vineland, before the graveside service at Greenwood Memorial Park in Millville, where he will be laid to rest, near family. The children and grandchildren of Ruben would like to thank all the friends and family that helped make Ruben's life and his motivation for such a brave battle against cancer and other medical issues, a happy and memorable one, as he traveled with his family, danced away at parties, enjoyed his favorite music and foods, always surrounded by people who loved him until the end. The family thanks the staff at the cancer centers, specialists that treated him to help give him a quality of life, for years beyond the expectancy originally thought to be had, and the Angelic Health Hospice, who helped make his transition to a heavenly existence with our Lord God, peaceful, graceful, and a comfort to his family. Memorial donations can be made to a cancer center of your choice, so that others may continue to benefit and continue their fight against the beast.