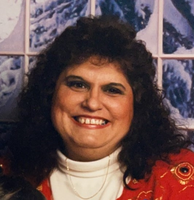 Frances "Frani" Ottinger-Friedman, 65 years of age, passed on Tuesday August 24, 2021 peacefully at the nursing home where she resided. Frani was born in Vineland, NJ on June 28, 1956 to Charles Ottinger and Theresa Spinelli-Ottinger. She was the youngest of four children, two preceded her in death. Frani was raised in a Catholic household and lived two blocks away from Sacred Heart, where she attended church and school. Frani was an alumni of the Sacred Heart Class of 1974. Frani married William Friedman in 1993 and had one daughter named Gabrielle. Frani became a stay-at-home mother and helped manage her husband's bread business. In 2007, Frani came down with a physical illness which caused her to become permanently disabled. During this time, Frani struggled with mental health problems as well an eating disorder. In 2012, Frani made a personal decision to put herself in a long-term care facility where she was a resident in multiple nursing homes in the local area. In her years spent in these facilities, she touched so many hearts with her kind soul and loud sassy personality. Anyone who knew Frani, knew she always had to have her jewelry on and she made sure her hair, nails and make up were done regardless of how she was feeling that day. She loved to color and do word search puzzles in her free time. Frani always made sure to tune into her daytime stories while she was making bracelets for others. She was a very crafty women who loved making custom photo albums of her memories. In her healthy years in life, Frani enjoy taking trips down to the Cape May ferry, going to Ocean City beach, and attending Capri Swim club with her family in the summers. Frani is survived by her one and only daughter, Gabrielle Friedman, two grandchildren, ex-husband William Friedman, one sister, four nephews and numerous extended family. In addition to her parents, Frani was preceded in death by her brother Charles "Chalky" Ottinger (2015), Christine Schneider (2015), and her nephew (2001). A small memorial service will be held on Wednesday September 1st, 2021 from 9am-11am at DeMarco-Luisi Funeral Home for any family, friends and caretakers of Frani that would like to attend. "You will never find peace and happiness until you are ready to commit yourself to something worth dying for" May you have finally found your peace. Love you forever & always your only daughter.