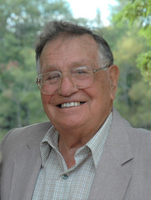 Joseph Peter Cairone—family patriarch and military veteran— passed away peacefully at his home on August 29, 2021. He was 94. Born on December 14, 1926 to Frank A. Cairone and Maria Gracia DiMatteo Cairone, both of Cilento, Italy. Joe was a first-generation American and the youngest of seven children. He was a lifelong resident of Malaga, New Jersey. After graduating from Clayton High School in 1944, he enlisted in the United States Army. He served his country in active duty from 1945 to 1947 as a staff sergeant in Paris, France and was awarded the World War II Victory Medal. Returning home from service, he met Dolores Ceto and they married in 1951. They built a house on Main Street, Malaga, where they lived their entire lives and raised three daughters. Their home became the hub of all family gatherings and holidays for seven decades and their back door was always open to all family and friends for coffee, conversation, and cards. Joe began his career at the Delaware River Port Authority in 1957. Starting as a toll collector, he was promoted through the ranks into their Engineering Department where he worked for 34 years until his retirement. Joe enjoyed an active social and civic life—as a member of the Malaga Fire Company, Knights of Columbus, Malaga Bearcats Gunning Club, and Republican Club. Joe spent his youth working on the family farm and continued his love of gardening at his own home, raising strawberries for many years, along with a variety of vegetables. Joe loved to travel, and he and his wife traveled extensively throughout Europe and the United States. He loved to go for "rides" and loved taking his family to the beach. Summer vacations were spent in Ocean City, New Jersey where he enjoyed the beach, boardwalk, and the annual crabbing outing. He loved to sit on the porch in the morning down the shore while he enjoyed a cup of coffee with his wife and loved watching the Phillies games while crabs and gravy simmered in the kitchen. He devoted his life to his family and his beloved wife, Dolores of 70 years, who would pass one day after him. He is survived by his three daughters, Diana Horn of Malaga, Sharon Grochowski (Michael) of Franklinville, and Barbara Morris (Michael) of Delran; nine grandchildren and eleven great-grandchildren. A viewing for Joseph will be held at the DeMarco-Luisi Funeral Home, 2755 S. Lincoln Ave., Vineland, New Jersey, on Friday September 3, 2021 from 6pm to 8pm, followed by a Catholic mass on Saturday, September 4, 2021, at 10:30 am at The Parish of St. Michael The Archangel, Church of the Nativity, 2677 Delsea Dr., Franklinville, New Jersey. Interment will follow at Overlook Cemetery in Bridgeton, New Jersey. In lieu of flowers, donations can be made in Joseph's name to the American Diabetes Association. Masks are required at the funeral home and church