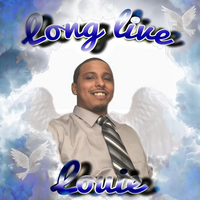 Louis Edwin Mendez III "Louie" suddenly passed away September 12th at the age of 30. He was born on October 5th, 1990 to Louis Mendez II and the late Maria Santana. As a child he attended the Millville School System and resided in the area as an adult. Louie worked as a supervisor at AMD and when he wasn't at work he enjoyed playing his playstation, spending time with family, and hanging with his boys. Louie leaves to cherish in his memory his fiance of fourteen years, Brandy Rosario; their children, Angelise, Louis IV and Airielle; maternal grandfather, Angel Simonetti; four sisters, Maria Lopez (Francisco), MaryJo Rivera (Benito), Giselle Thomas (Jake) and April Mendez; three brothers, Anibel Lopez (Luz), Rafael Lopez (Agnes) and Edwin Santana (Krystal); eleven nieces; twenty-one nephews; his boys who were more like brothers, Cano, Baby, PoPo, Rodger, Chris, Macho, Tito and Christian; his extended siblings, Theresa (Keem), Beatrice, Lorissa, Ayriael, Manny, Angel, Rebecca (Don), Andy (Monica), and a host of aunts, uncles, cousins, great nieces, great nephews, and many friends. He is predeceased by his mother, Maria Santana; paternal grandmother, Rose Mendez; paternal grandfather, Louis Mendez Sr.; maternal grandmother, Natividad Suarez; brother, Jesus Fernandez; and sister, Amanda Mendez. Louie was one of a kind, if not giving you the shirt off his back he was buying you one. To know him was to love him. Although short lived, Louie made sure he lived his life to the fullest especially near the end. As we all continue to live our lives without him physically here we must think of how he would want us to continue living each day as if it was our last. Louie will be missed and never forgotten. Family and friends will be received on Monday, September 20, 2021 from 11:30am to 1pm, with funeral services at 1pm at DeMarco-Luisi Funeral Home 2755 S. Lincoln Ave., Vineland. Burial will follow in Greenwood Memorial Park, Millville.