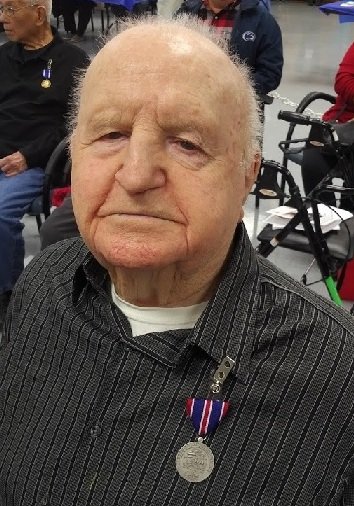 Paul Michael Missar passed away on May 24, 2019 at the age of 94 years old at the Veterans Memorial Home, Vineland, NJ.  Paul is predeceased by his parents, John and Mary Missar of Yeadon, Pa., and is siblings Theresa, Jack, Loretta, Michael and Daniel.

Paul is survived by his wife of 43 years, Lois (Unglaub), his children Linda (DiMatteo), David and Kathleen (Earle) along with 9 grandchildren and 13 great-grandchildren.

Paul was born in Philadelphia, Pa. in 1925.  He attended West Catholic High School and entered the U.S. Navy in 1943 where he served until 1946 as a GMSpecialist2.  Upon discharge from the Navy, Paul became a member in the Iron Worker’s Union, Local 401, in Philadelphia, Pa. until his retirement.  Upon retirement, Paul obtained his NJ Master Plumbers License and had his own business for many years in Seaville, NJ.

Paul enjoyed his family, fishing and his work with the Knights of Columbus and the Croatian Relief Services where he donated his time and resources to help children who were victims of the Croatian War.

Services will be private and mass will be offered at the Catholic Community of the Holy Spirit in Mullica Hill and Woodstown, NJ where Mr. Missar was a member for many years.  In lieu of flowers, if you wish to honor Paul’s life, please make a donation in his name to the Croatian Relief Services, 225 Anderson Avenue, Fairview, NJ 07022.  Arrangements are by DeMarco-Luisi Funeral Home 2755 S. Lincoln Ave., Vineland, NJ.

Share Your Memory of
Paul
Upload Your Memory View All Memories
Be the first to upload a memory!