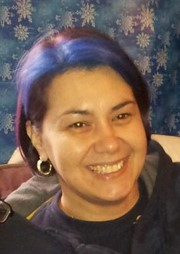 Janet was born February 24th, 1967, the daughter of Esther (Rodriguez) and Antonio Barreiro. She attended and graduated from Vineland High School in 1985. For the past 15+ years, Janet worked as a Senior Clerk for the Cumberland County Division of Social Services where she routinely went above and beyond helping members of her community.

Janet is fiercely competitive, never backing down from a challenge.  In her youth, she was a cheerleader at church, and is proud that at 54 years young, she can still do a split.  She had a bubbly personality and is known for her beautiful smile.  She always welcomes everyone with open arms and is never judgemental.  Janet is a truly genuine person who always treats everyone equally no matter who they are or where they come from.  She always gives a listening ear and has a way with words like no other so that you always leave stronger than before.

In her free time, she loves listening to her favorite singer, Marc Anthony, crafting, completing puzzles, and gardening, a skill she learned as a child by helping her father in their family garden. Janet is at heart a Daddy’s girl.  Family is so important to Janet, and she always sides with her children over anyone else.  She loves both her mother and father dearly, so much so that she makes time to have coffee with them at their house every morning before going to work.

She is survived by her husband, Roberto of 37 years and her five children, Roberto Jr. (Mayra), Monique Mon (Huron), Raymon Rivera (Maria), Ja’nique, and Ashanty Torres, as well as her parents, Esther and Antonio; her siblings, Jacqueline Rodriguez (Raul) and Melba Barreiro, and her gorgeous grandchildren, Jaedon, Christian, Julian, Grey, Johan and many nieces and nephews, and her chosen family, Reree and Redz Perez and many more in Interlachen, Florida.

Her life will be celebrated on Wednesday, August 4, 2021, from 9:30am to 10am, followed by funeral services at 10am at DeMarco-Luisi Funeral Home, 2755 S. Lincoln Ave., Vineland. Private burial will follow at Siloam Cemetery, Vineland.