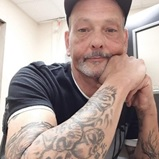 Please share a memory of Karl to include in a keepsake book for family and friends.
View Tribute Book

Karl Steven Smith, passed away peacefully at Inspira Medical Center, Vineland on September 9, 2021, after a massive heart attack. He just turned 57. Born on September 6, 1964, to William Smith and Linda Smith, both of Millville, NJ. Karl was William and Linda's only child together.

He graduated from Millville Senior High School in 1982. Karl had a love for sports, he enjoyed watching Phillies Baseball and Philadelphia Eagles football. He loved to go for "rides" and getting his Dunkin Donuts for him and his grandson every morning and evening.

He worked as a laborer for over 30 years, spending the last 8 years at Ardagh Group.

He is predeceased by his father, William Smith, and his daughter, Kayla Smith.

Karl will be missed by his family and friends. We can take comfort in knowing that in his passing he saved three lives through organ donation. He will be able to rest in peace in heaven with his father and daughter who he held dear to his heart.

Family and friends will be received on Thursday, September 16, 2021 from 9am to 10am with funeral services at 10am at DeMarco-Luisi Funeral Home 2755 S. Lincoln Ave., Vineland. Burial will follow in Greenwood Memorial Park, Millville.

Share Your Memory of
Karl
Upload Your Memory View All Memories
Be the first to upload a memory!
Share A Memory
Plant a Tree