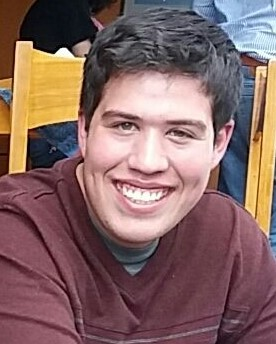 Please share a memory of Samuel to include in a keepsake book for family and friends.
View Tribute Book
Samuel Reber, 26 of Bridgeton, on January 24th our sovereign God took our precious son, Samuel Esteban home to Himself. We are no longer privileged to have him in our midst. Samuel was a vivacious, gregarious, intelligent, and talented young man. An avid reader, fluent in Spanish, and skilled on three instruments. He loved music and was widely eclectic in his taste. He was intellectually curious and no stranger to hard work. He was especially fond of animals and treasured the family pet doggie, Moe, his constant companion for fourteen years. He was a movie critic in his own right. Most of all, however, he was a firm believer in the gospel of Christ. He loved singing traditional Christian hymns. He studied at the community college and last worked at Van Dyke's in Millville where it was reported that he was highly esteemed, having brought light and laughter with an award-winning smile to all his coworkers, as well as to the owners and administrators alike. His passing brings profound grief to his parents and family: to his parents, Frederick and Celina Reber; to his sister, Lydia; his brother, Jonathan; and niece Ana. In addition, he is survived by his aunt and uncle, Ed and Reiko Reber; and cousin Justin. He has many grieving family members and friends in Guatemala as well, particularly the Leal, the Fuentes, and the Valenzuela families. He was predeceased by all his grandparents. A memorial service is planned to take place at the New Hope Presbyterian Church, 65 Hitchner Ave., Bridgeton on Saturday, February 12, 2022 with a visitors' reception starting at 10:00am and a service at 11:00am. In lieu of flowers, donations may be made in Samuel's memory to the South Jersey Regional Animal Shelter, 1244 N. Delsea Dr., Vineland, NJ 08360. Arrangements are by DeMarco-Luisi Funeral Home, 2755 S. Lincoln Ave., Vineland.
Saturday
12
February

Share Your Memory of
Samuel
Upload Your Memory View All Memories
Be the first to upload a memory!
Share A Memory
Plant a Tree