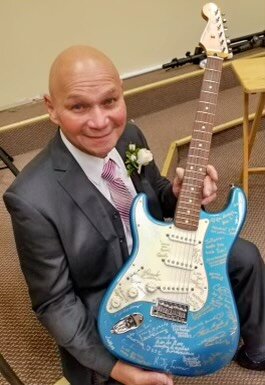 Please share a memory of Luis to include in a keepsake book for family and friends.
View Tribute Book
Luis Roman Sr, "El Teacher", was born on July 19, 1955 in Bayamon, Puerto Rico to parents, Pedro Montes and Antonia Andino. There he lived with his six siblings until he married the love of his life of 43 years, Ana, in December 1978 and moved to the US. Together they had three children. Luis was a faithful servant of Jesus Christ and shared the gospel through music, which was his greatest passion. Many came to him for lessons and he became their beloved teacher. In addition to teaching music Luis was also a great friend, always willing to lend a helping hand. He built strong relationships with his coworkers in the many years he worked at Tropicana Casino and was always admired for being a good hardworking man of God. Although he was loved and will be greatly missed by many, we know that he is walking with the Lord and his footprints will be indelible. Luis is survived by his siblings, Carmin, Brunilda, Ada, Dalia and Pedro Jr; his wife, Ana Roman and children, Ana de Jesus Roman, Luis Roman Jr, and Daisy Flitcraft; their spouses, Frank de Jesus, Andrea Borrayo and Steven Flitcraft Jr; his eight grandchildren and great-grandson to be, Carlos Javier Mercado Roman, Jeancarlos de Jesus Roman, Leyla de Jesus Roman, Anthony Roman, Abigail Flitcraft, Logan Flitcraft, Adrian Ortiz and Sebastian Gibson. Family and friends will be received on Friday, April 1, 2022 at Vida de Fe Church, 1115 S. Main Rd., Vineland from 6:30pm to 7pm followed by funeral services from 7pm to 8pm. Burial will be in Cementerio Municipal de Trujillo Alto, Puerto Rico. Arrangements are by DeMarco-Luisi Funeral Home 2755 S. Lincoln Ave., Vineland.
Friday
1
April

Share Your Memory of
Luis
Upload Your Memory View All Memories
Be the first to upload a memory!
Share A Memory
Plant a Tree